In my last post I told you I had joined a new group, called *Create!* A Project a Day – February*, on Flickr and the challenge was to create something everyday for the month of February.  I had three ideas this morning…..a bag pattern from Fat Quarterly Magazine, an apron pattern from the same magazine, or some crocheted jar covers.
The bag won! 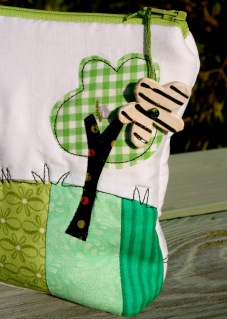 If you didn’t already know, I have a bag fetish!  So I should have known the bag would be first.  The pattern is by Monika Wintermantel.  She is a flickr friend and I have admired her work for a long time!  Check out her blog also www.monaw.blogspot.com, she does some amazing work!

This is the front of the bag.  I basically followed the pattern for the this side.  For the back I added my own touch…..

As well as some ceramic buttons that I made.
I am hoping this group keeps my inspiration in full gear since I have some upcoming shows to work towards and I have had a blast the last few weeks creating new items for the last show.
I’ll be back tomorrow with a new creation!